In 1876, John Studebaker, President of the Studebaker Brothers Wagon Works, took his display wagon to the United States Centennial Exposition in Philadelphia. J.L. Mott Ironworks from New York brought an elaborate cast-iron fountain to the Exposition to display.

According to a review at the time, Mott’s fountain stood 25′ tall and was said to have the largest cast-iron basin in the United States. Eventually, John Studebaker decided he would order one of these fountains to bring back to the City of South Bend.

On July 21, 1906, the fountain arrived in South Bend. It was electrified with hanging light bulbs, donated to the City by John Studebaker, and was placed in Howard Park. The fountain stood 28′ high with the bottom basin about 34′ in diameter. The cost was nearly $10,000.

Thousands came to Howard Park to celebrate the dedication of the fountain, reported as an, “…imposing ornate font with splashing waters illuminated by electric lights.” 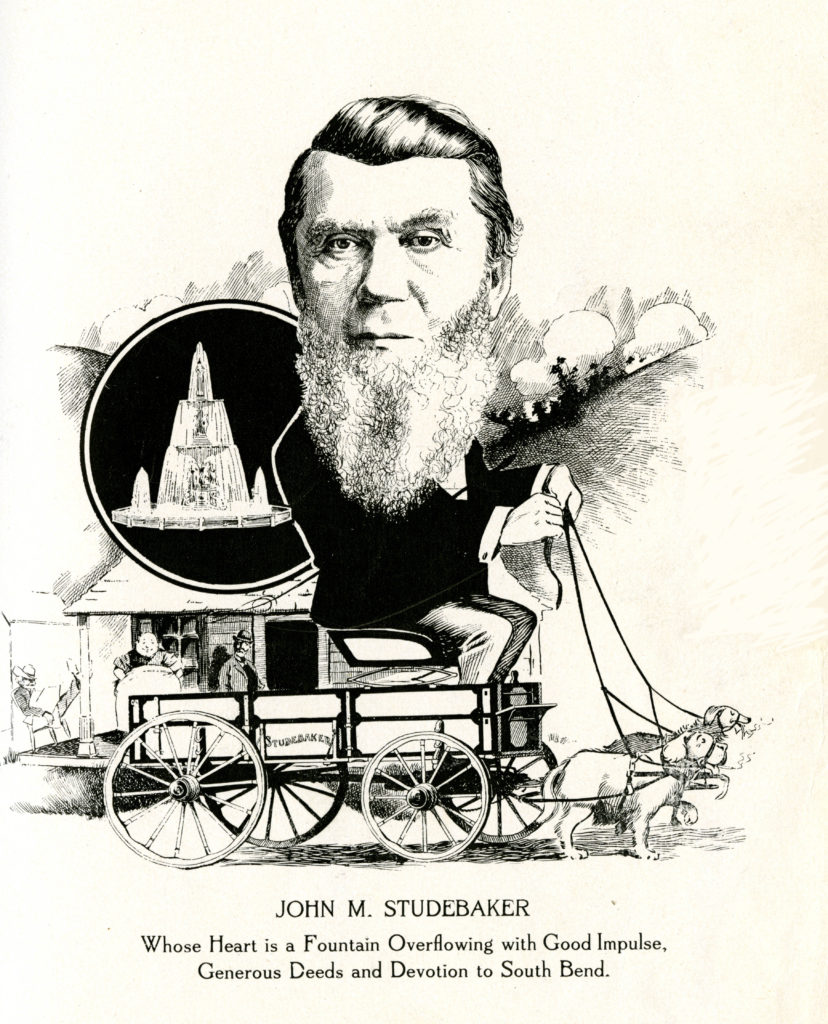 J.M. Studebaker gifted the city of South Bend the 28-foot electric fountain that stood for 35 years. Citizens continued to enjoy the beauty of the fountain until the fountain fell into disrepair and was dismantled in 1941. As World War II began, the City Parks dismantled the fountain. Many believed that the fountain had been melted down as scrap metal.

What Happened to the Fountain?

Fortunately, a local family had rescued many pieces from destruction and the family moved the fountain and its pieces (the top 1/3 of the fountain, 3 boys on dolphins, and two turtles) to their home along the river in Osceola, where it continued to operate as a fountain until 2009.

That same year, the Seiler family donated the fountain and all of its pieces to The History Museum. 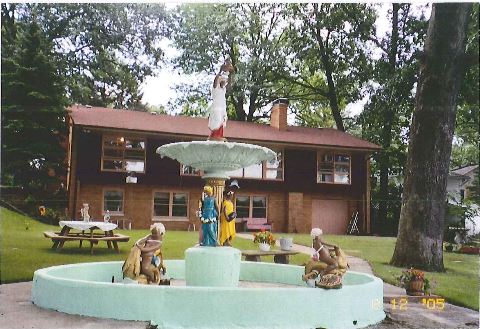 A landmark once thought gone forever would be reassembled piece by piece in Leeper Park.

The fountain restoration was completed by McKay Lodge Laboratory: Fine Arts Conservation. They restored the fountain’s original parts and handled the oversight of the entire project. Those parts that were either missing or could not be restored were re-cast by artisans of Robertson Iron, who acquired and still maintained all of the original molds from J.L. Mott Ironworks.

McKay Lodge meticulously reassembled all the pieces in order to recreate the beautiful fountain originally gifted by J.M. Studebaker and placed in Howard Park in 1906.

The City of South Bend generously committed to provide the infrastructure and installation for the project and when completed, the fountain was placed in a beautiful area of South Bend’s Leeper Park where it welcomes all as they enter our city from the north.

Today, the historic Studebaker Electric Fountain, rebuilt and restored to its original glory, occupies a place of prominence in the central section of the Leeper Park.

The elaborate Edwardian-era fountain’s female figures, cherubs, dolphins, and turtles gleam, much as they must have back in 1906 when the fountain was originally dedicated in Howard Park. It’s impossible to tell the newly cast pieces from the restored pieces of 113 years ago! 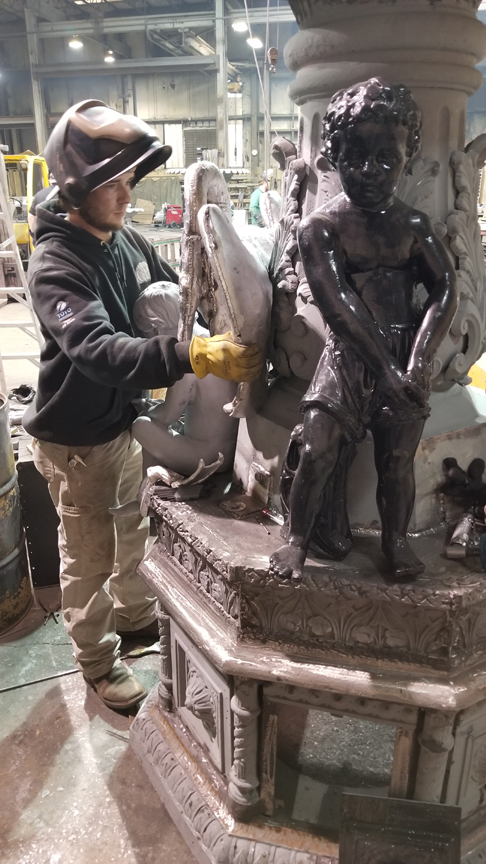 Once again the historic fountain is a gathering place for grown-ups, children, and all young-at-heart; where special occasions will be celebrated, culture can be expressed, art can be enjoyed, and the entire community can appreciate the beauty gifted to us so many years ago.

We hope you will join in support of this special endeavor to preserve this unique gift to South Bend for all of us to enjoy today – and for generations to come.

Support the continuing preservation of the Studebaker Fountain by buying a brick. For information on purchasing a brick, see our Donate page.